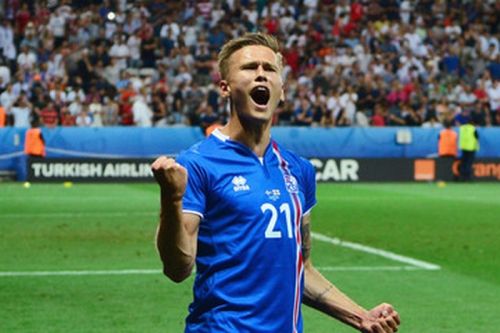 Arnór signed in the end of 2013 by Swedish top team IFK Norrköping from Keflavík. In IFK Norrköping he made a name for himself as one of the most interesting youth player in Allsvenskan and 2015 he won the Swedish league after scoring the 2-0 goal against Malmö FF in an absolutely crucial game about the championship. Arnór Ingvi has represented Iceland at youth levels such as the under-17s, the under-19s and the under-21s. Arnór Ingvi made his senior debut for Iceland on 13 November 2015 in a 2–4 away defeat at the National Stadium against Poland. He was a team member in the 23-man squad for the Euro 2016 and Arnór scored the winning goal in a 2–1 victory over Austria as Iceland finished second in their Euro 2016 group taking them to the Round of 16. Summer 2016 he signed a 5 year deal with Austrian top team SK Rapid Wien. Summer 2017 he signed a one year loan deal with Greece giant AEK Athens. Martin and Arnór cooperated between september 2016 and september 2017.